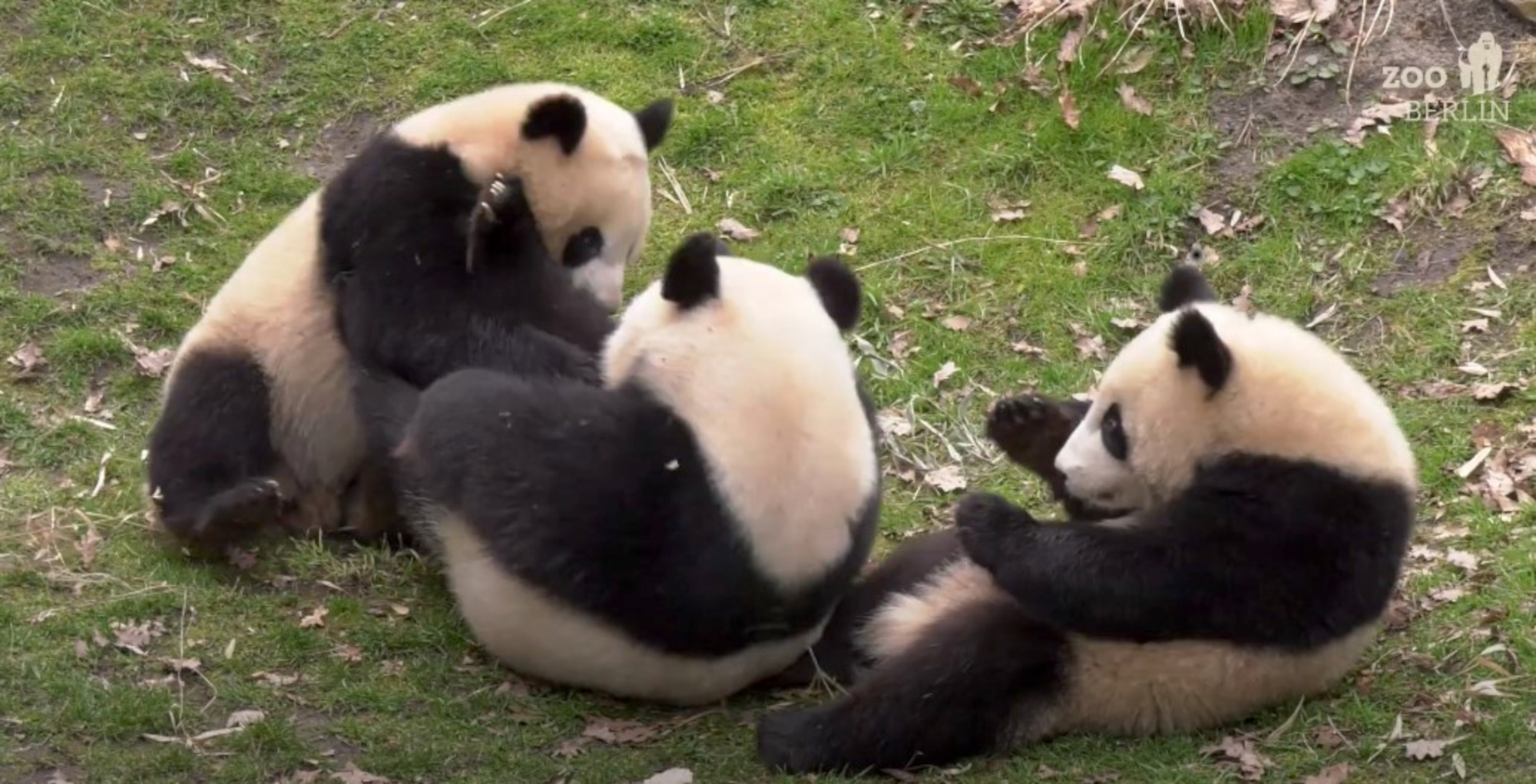 Two nearly 2-year-old panda cubs are seen here rolling around and play fighting at the Zoological Garden in Berlin, Germany.Zoo Berlin announced that Pit and Paule, the first panda cubs to be born in the country, have become a star attraction in the capital and are developing well.Panda keeper Corvin Schmohl is closely monitoring their growth on a daily basis. They were born on August 31, 2019.

However, despite being twins, the two are quite different from each other. Pit is a laid-back cub, always ready for a nap, while his brother Paule makes an incredible amount of noise and is always on the move.

Previously, Zoo Berlin shared a heartwarming video of the two nibbling on bamboo and explained: “Pandas begin to be interested in bamboo at the age of nine to 10 months” and will later “eat rations of between 10 and 20 kilograms (22 and 44 pounds) of bamboo. Per day!”

The cubs’ parents are mother Meng Meng, also seen in the footage, and father Jiao Qing. Both have been in Germany since the summer of 2017; they are on loan from China.

Pit inherited his relatively long snout and trusting eyes from his father, according to zookeepers.

“The two one-and-a-half-year-old panda boys Pit and Paule are the first baby pandas born in Germany so far. Their diet currently contains of bamboo and milk from their mother Meng Meng,” Katharina Sperling from Zoo Berlin told Zenger News.

The Zoo Berlin spokesperson said that feeding the panda family is not an easy task.

“Bamboo makes up 99 percent of pandas’ diets, and they eat up to 30 kilograms (66 pounds) of it each day. The keepers at Zoo Berlin offer the panda family more than 90 kilograms (198 pounds) of bamboo — per day!” she said.

Zookeepers use honey and apples to persuade the two panda cubs to head back indoors after their daily outdoor adventures.

The cubs are expected to spend their first few years in Germany, but will eventually make it to China, although the time frame is unclear.

America has moved on. Fauci and @CDC has lost all credibility @CNBC https://t.co/B9SqKmdhRZ
View on Twitter
0
0

@YoDoctorYo @WHO @cdc I appreciate all you do @YoDoctorYo !
View on Twitter
0
1